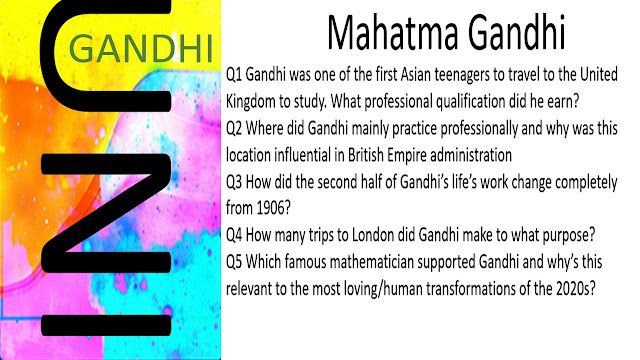 A1 Gandhi studied at the Bar of London becoming a barrister. He had grown up on the West Coast of India, north of Bombay (today’s Mumbai). In 1888, he perceived Indian universities as second rate and wanted to network into the epicentre of world knowledge that London was still perceived to be. Academically, he was somewhat disappointed describing many of his peers and teachers as drunk by teatime. However, he relished hosting a cross cultural student club in the world’s capital – his start in becoming one of the most extraordinary international networkers of his era. London’s lawyers are situated between the journalistic Fleet Street and the City which is both trading and financial hub of London. One of Gandhi’s key abilities became journalising and attracting storytellers of his emerging influence as mediator of change across the old world’s three continents

A2 On his return to India as a fully qualified barrister, Gandhi could not find high level work. He became employed by an Indian merchant connecting South Africa which is where Gandhi’s professional work as a barrister took place. Although the Suez Canal had opened in 1869, circumnavigating Africa was still the dominant route for empires of Northern Europe to colonise the far east. If you take out a map and draw 3 straight lines from the South African port of Durban to 1) Bombay, 2) 2) Calcutta (todays Kolkata), 3) Singapore- you see 3 ocean routes which British Empire sought to control. The coastline west of Bombay covers the whole of the middle east and the East African coast. Until 1912 Calcutta was the capital of India with its situation in the Bay of Bengal the prime operating space for the most powerful business monopoly: the East India company. Further East,  Singapore’s significance being where Asia’s south coastal belt ends and far east coast begins, including the sea route to China. With Asians being over two thirds of the world’s population, the southern and eastern coastal belts of asia explain where most of the human race depend on for world trade.

A3 In 1906, Gandhi was thrown out of a first class train carriage for having the wrong color skin. This became a life changing moment – Gandhi suddenly saw his profession as Bar of London barrister as the systemic problem constraining his peoples livelihoods. He started planning how to call for independence of India but first he wanted to design a totally new education system building vocation skills Indians would need and freedom from the English mindset- a  peaceful whole truth  consciousness “satyagraha”

A4 Gandhi travelled five times to London. The first time as student; the other 4 times to plant coalitions for freedom and independence. His fifth visit drew thousands to the Quakers Hall in London – unlike noisy politicians of a television age, Gandhi dramatizes sitting silently to listen to supporters’ co-creative suggestions- among other good fortunes London’s rountable served to connect the extraordinary educational revolutionary Maria Montessori. Gandhi never seems to have sought fame for himself but he certainly multiplied storytellers of positive actions all around him. For example, by chance one of his landings in England accidentally coincided with the start of world war 1. Unable to continue his trip to India, he linked in first aid workers in London.

>A5 Einstein, arguably mathematics’ number 1 in system transformation,  started up a correspondence celebrating the practices of Gandhi. It is Einstein’s quotes on the world’s sustainability depending on Gandhi’s model of leadership which contextualise Gandhi’s maxims on be the change and end poverty to inspire deeply local and urgent goal-oriented community building round the world – search out customised relevant creativity eg https://bn-mclp.org/2010/12/09/perspectives-on-leadership-lessons-f...
; note in London the https://gandhifoundation.org/ was founded as a charity by filmmaker Richard Attenborough, brother of the world leading nature broadcaster David Attenborough

To learn- and contribute - more about connections and alumni of Gandhi, - search

some bonus questions on south africa

3) nelson mandela was inspired by gandhi

all three are true