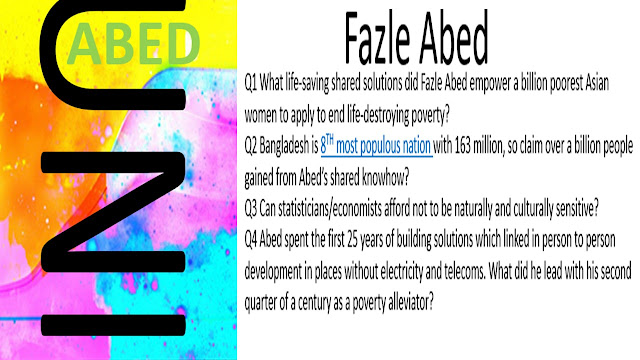 A1 After 15 years in a career that saw his rise to regional CEO for the oil multinational Royal Dutch Shell,  Fazle Abed life’s purpose was changed by 3 disasters- each killing a million of his poorest compatriots. He devoted his next 50 years of life to designing microfranchises which poorest village mothers applied first to building last mile health and food security services. He translated the world’s most relevant innovations for community building by designing their marketing and financing to scale across hundreds of thousands of villages- by definition poorest Asian villages are those that colonial empires left out of electricity grids and telecommunications- so the solutions had to be peer to peer action learned and back in the 1970s most village mothers were also illiterate. Hi-trust marketing for the poorest in the world required systemically different media than western television.   Abed’s most extraordinary innovation was economic - it integrated bottom-up financing systems at both micro and macro levels. It wasn’t until thousands of health service and food security village mothers microfranchises were replicating that he designed microfinance specifically for female village entrepreneurs’ community banking needs. He changed how global aid was channeled through blending two models- bottom-up disaster relief grants are different in skill-transfer consequences than top down ones; banking that is responsible for designing positive cash flow village businesses that change market value chains is the opposite from banking that chains borrowers to debt. You can also map how Abed’s grassroots networking solutions triangularise the 1-2-3 of sustainability goal generation: 1) end poverty, 2) end death by famine, 3) end death by lack of life critical last mile health services. NB Abed was always searching value chain connectivity and goodwill flows across 4 levels of advancing human lot : one village community, hundreds of thousands of villages, national market leader, and redesigning global networking. Once village mothers had savings they demanded brac innovate education of all ages so their girls could leap far beyond village poverty lines

A2 The solutions needed to empower Bangladesh village mothers were 95% translatable to the solutions Chinese village women needed to hold up half the sky. Abed was very modest about this – he claimed brac’s 150000 womens para-health micro franchise was modelled on china’s barefoot medic network; still he contributed to china the solution that ended death of one third of infants in humid Asian villages: namely, the scaling of oral rehydration as an essential skill of motherhood; and when James Grant of UNICEF saw the global impact offered by oral rehydration he asked Abed what other village health partnership mattered most?- nation wide vaccination became UNICEF's and brac’s number 1 worldwide advance of the 1980s.

A3 WE the peoples of the 2020s have reached a stage of computing numbers where the world’s biggest maths mistake could end our species. Wherever top down legal constitutions are out of sync with natures law we multiply exponential risks. Moreover the more top-down power invested in a human system, the more Einstein’s chaotic new maths comes into play over time. Einstein simplified his world changing discoveries by saying when a male scientist says there’s nothing left to innovate in his field he means until we study dynamics at a more micro and open  level than my expert silos were able to analyse historically. Just as civil engineers can’t build safe buildings without calculus,  the sustainability goals networking generation needs Einstein true values to  blend real and digital services into borderless operational platforms. Urgent 2020 cases include vaccines distribution and climate harmony for everyone-  for more on urgent humanization of artificial intelligence see dialogues between mapmakers of futureollife.org and UN leader Guterres

A4 1996:  Fazle Abed was 60 years old when new tech partners- both solar and mobile- started experiments in Bangladesh which thanks to brac had emerged by my the start of 21st C as the open university of micro-health, micro-education, micro-finance. Abed’s final 25 years corresponded to unprecedented local to global change everywhere. More space is needed than we have to detail how he left no corner of the earth unsearched in building what has become the largest NGO partnership. Clues include:

How did Abed respond to Mrs. Steve Jobs’ question- when is brac going to go global?

Why choosing Netherlands as brac international systems HQ was a wise move culturally as well as corporately?

How many ideas agents of Chinese woman villagers continued to brainstorm with abed and his hi-trust alumni?

Why Fazle Abed’s favorite conversation topic with every Asian ambassadors through the 2010s was : how to build a transformative coalition of borderless new universities empowering women scientists and women community builders?

for more go to accumulating archive and curricula of partners connecting the abed ...