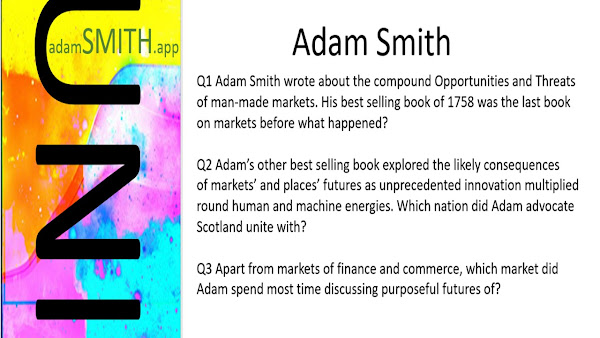 A1 Adam’s Moral Sentiments was the last book before Smith’s  co-worker James Watt at Glasgow University started up the age of Machines and humans aka industrial revolution. Moral sentiments explored the pre-industrial hypothesis that markets advancing the human lot multiplied goodwill between all participants In supply and demand. The model for this in Smith’s mind was a community market in which enough people had transparent  information on value ( costs and quality) that market purpose  evolved around those who worked hardest on multiplying goodwill

A2 As James Watt alumni started up the greatest innovations ever seen Adam hoped Scotland –and Ireland - would linkin with the English speaking world of America’s Unites States. One reason would be the importance of a place lab for continental scaling of advances in human and machine energy. Another reason was Scotland of the 1760s was half a century into being colonized by capitalists in London. Scottish youth may never have been enslaved but they certainly were press-ganged and Smith’s concerns about London’s plans for Scottish development became evident in London’s 19th century thinning strategy. This aimed to reduce the population of Scotland explains why both Scottish and Irish are mainly Diaspora nations – up to four fifths of whose peoples have become worldwide networks whose lives are not directly connected to their homeland. Adam had one condition for Scotland uniting with north east coastal states of America: slavery should not only be repealed but as machines spread industrial revolution from state to state, any local market sector whose economy relied on cheap labor should see its owners bought out at a fair price so the market could be redesigned around value chains of all lives matter

A3 Adam was most concerned with futures of education. His ideas begin an extreme segmentation of systems- economists: inter-generational designers, short-term extractors and externalisers. Adam argued for urgently designing life-long action learning- he noted in particular that  many factory jobs would be so boring that these workers would most need joy of learning to make the most of life beyond work such as developing communities that thrived around arts and natural diversity. Adam also boldly stated that the last thing any civilised society should want is a narrow  group of people certifying which youth  were worth a nation depending on as determining its future. Before London’s takeover of Scotland, records show that the clan structure of Scots actively invested a larger share of the nation’s budget in education than any western nation. Adam’s own livelihood depended more on coaching a few young men and vesting Oxford and France to see universities there than salary from Glasgow University. Adam’s diaries famously note that Oxford’s design of British Empire’s higher education system did not value youth but the convenient lives of professors and the favors they curried with London’s administrators.

To learn- and contribute - more about connections and alumni of Adam Smith, - search

you may also like to suggest ways of supporting year 10 of the journal of 21st c adam smith economics   --- chris.macrae@yahoo.co.uk